New dye will help track down the signs of neurodegeneration 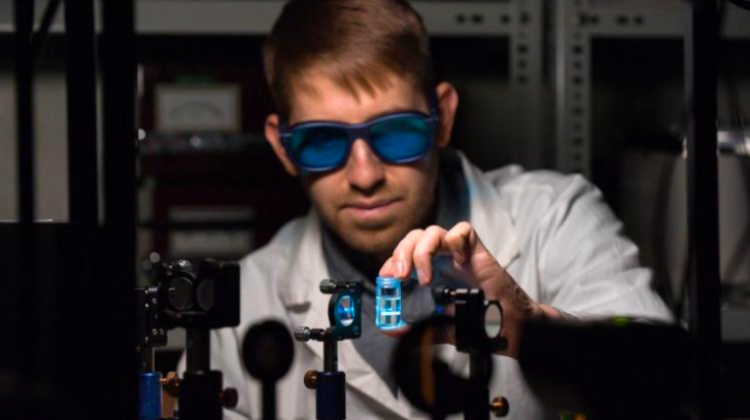 Polymer dye proposed by a Polish-American group of scientists will help to detect the early symptoms of neurodegenerative diseases. It binds to specific amyloid structures. It is designed to be used in fluorescence microscopy.

Symptoms of neurodegenerative diseases, visible years before the clinical symptoms appear, can be detected during the examination of medical samples by means of fluorescence microscopy. The condition is to use suitably sensitive and selective dyes that bind to specific amyloid structures. New dye proposed by a Polish-American group of scientists is a step towards personalized neuromedic prophylaxis of the future.

The representatives of the Institute of Physical Chemistry PAS informed about the study published in the Journal of Luminescence (DOI: 10.1016/j.jlumin.2018.03.038) in a release sent to PAP.

The researchers remind that several dozen diseases are related to the formation of amyloid fibrils in cells, deposits with complex shapes. These diseases include memory disorders, as well as Creutzfeldt-Jakob or Alzheimer`s disease.

Amyloid deposits form as a result of improper folding of proteins, mainly the protein known as amyloid beta. There are reasons to believe that soon the first signs of neurodegeneration will be identifiable in medical laboratories at earlier stages of brain disease development, and in a much more precise way than before. The new detection possibilities open thanks to the achievements of the Polish-American team, which included scientists from the Institute of Physical Chemistry PAS in Warsaw, Wroclaw University of Technology, University of Michigan and University of California, Santa Barbara.

With the aging of societies, the importance is growing of early detection of neurodegenerative diseases, usually manifesting in the elderly. The stakes are high, as the data on Alzheimer`s disease show. According to the representatives of the Institute of Physical Chemistry PAS, among people over 70 years of age 3 percent of the population suffer from Alzheimer`s, and after the age of 90 it is half of the population. We know that this disease probably begins even 20 years before the onset of its first symptoms. In this situation, early and precise detection of its harbingers is particularly important.

"Before a lab technician looks at a cerebral fluid sample taken from the patient under a fluorescence microscope, he must somehow mark the target chemicals with a glowing dye. Usually, small molecules are used for this purpose, so that they bind only to the molecules that should be tracked. We have proved that the polythiopene derivative called PTEBS can be successfully used as a dye. It`s a polymer, which is a really big atomic structure. In practice, it turned out that the size of PTEBS is not a disadvantage, but quite a big advantage" - says Dr. Piotr Hańczyc (the Institute of Physical Chemistry PAS, currently the Faculty of Physics, University of Warsaw), the lead author of the publication.

The team`s research allowed to conclude that the presence of both target chemical molecules and their aggregates can be registered with PTEBS dye. The dye works even when they occur in low concentrations in the sample - significantly smaller than those detected by thioflavin T. That substance is currently one of the most popular fluorescent dyes used for marking protein aggregates.

Another important advantage of the new dye is related to the existence of polymorphic forms of amyloid, the fact that while one configuration of atoms in a molecule may be responsible for triggering neurodegenerative processes, another form turns out to be harmless.

"Standard dyes are small molecules. You can not do much with them, in addition they are thoroughly tested and we already know a lot about them. The molecules of our dye are large, and many substituent groups are attached to the main chain. These groups can be modified and expanded to a large extent, increasing the affinity of the dye not only to the selected form of amyloid, but also to its specific polymorph. This gives a lot of options" - emphasises Dr. Hańczyc.

According to the representatives of the Institute of Physical Chemistry PAS, the new dye should help in more precise determination of polymorphic variations responsible for the course of neurodegenerative processes in patients. Its applications in prophylactic tests are particularly promising. They would allow to select more effective treatment strategies, tailored for particular patients. This procedure could allow to significantly delay the development of neurodegenerative diseases and in the future possibly even completely prevent them.

The Polish part of the research project was financed from the International Brain Research Organization (IBRO) grant.