Skeleton of a prehistoric hunter printed in 3D 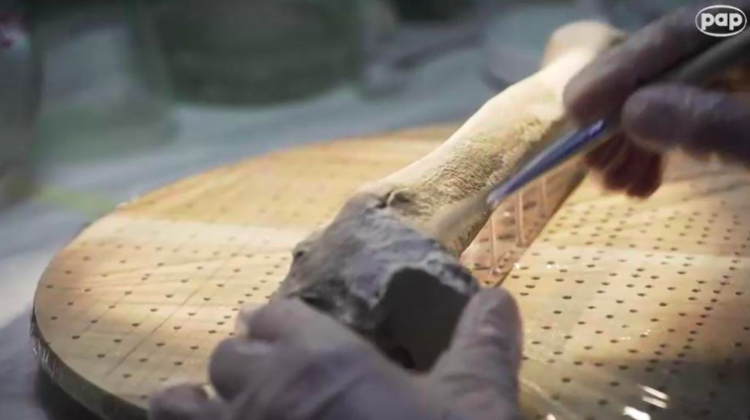 Researchers from the Cardinal Wyszyński University in Warsaw have printed a 3D copy of the oldest skeleton found in Poland - more than 6,500 years old - known as the Man of Janisławice. The copy will be displayed at a special exhibition, and the original will be used for scientific research.

The remains of a prehistoric hunter known as the Man of Janisławice were discovered before the World War II, in 1937, in Janisławice near Skierniewice. Interestingly, this discovery was not made as part of regular excavations, but accidentally. "The remains had a troubled history: they were passed from one researcher to another, for some time they were even forgotten" - told PAP Dr. Jacek Tomczyk from the Institute of Ecology and Bioethics, Cardinal Wyszyński University in Warsaw.

Thanks to the project financed by the National Science Centre "Old material with new methods" Dr. Tomczyk and his colleagues return to finds from several decades ago - just like the Man of Janisławice - to re-examine them using the latest available methods.

Conducting new research is not the only goal of researchers from the Cardinal Wyszyński University. They also want to help preserve the most valuable finds for future generations - both researchers and the general public. That is why they decided to print a copy of the human skeleton from Janisławice in 3D technology.

In 2013, an exhibition about the Man of Janisławice was organized at the State Archaeological Museum in Warsaw and the original skeleton was displayed. According to Dr. Tomczyk, the preparation of that exhibition greatly limited the work of scientists. The main problem was that for a long time it was impossible to carry out research that would require removing the skeleton from the exhibition.

"Printing this material gives us the opportunity to display printed copy of the remains at exhibitions and preserve the original in the vault, for specialized biological research" - he explains.

"In addition, displaying skeletal material often involves ethical problems: people do not want human remains to be displayed" - emphasizes Dr. Tomczyk. He adds that printing the material completely removes the ethical aspect, because only artificial bone materials are presented.

The researcher also points out that in the future research methods will be better and - as a consequence - next generations of scientists will want to do their own research on the human skeleton from Janisławice. "This material is very rare and the State Archaeological Museum is very reluctant to share the remains to collect samples for research, which seems obvious" - says Dr. Tomczyk. He acknowledges that at some point the material can be significantly depleted. But exhibition visitors will always be able to see the skeleton in the form, in which it was found - because it has been immortalised in the form of a 3D print.

How did researchers create such a faithful copy of the remains of the Man of Janisławice? First, they had to prepare an accurate virtual model of the skeleton. Two methods were used for this: photogrammetry and manual 3D scanning with structural light.

"Structural light scanner captures bone geometry very well" - says Paweł Waligóra from the Information Technology Centre of Humanities and Social Sciences, Cardinal Wyszyński University, responsible for the technical side of the project. "However, things like texture, colour and details are slightly blurred on the scan. The photogrammetic method handles geometry less accurately, but texture is very accurately reproduced. Later, we combined the two methods, which allowed to create 3D models with very high detail and very contrasting texture" - he explains.

CJP (ColorJet Printing) technology was used for the printout itself. "It is a powder printer that prints with a material very similar to plaster" - says Waligóra. "The printer pours a layer of powder, and then special heads spray the adhesive with dye. Similarly to a section in computed tomography, layer by layer we print subsequent cross-sections of the bone until we get the whole model" - he explains.

He adds that this particular method has been chosen for several reasons. "First of all, we get a colour printout, which we do not have to dye later" - says Paweł Waligóra. "Secondly, the material itself is very similar to bone. In the interaction with the bone printed with this method, it feels like touching the real thing: the warmth of the model is the same as the original. Someone who touches such a model can make a mistake and not to realize that they are holding a 3D printout. If the same person touched a plastic model, a different temperature, different weight would be evident - it would be immediately clear that it was a copy" - he emphasises.