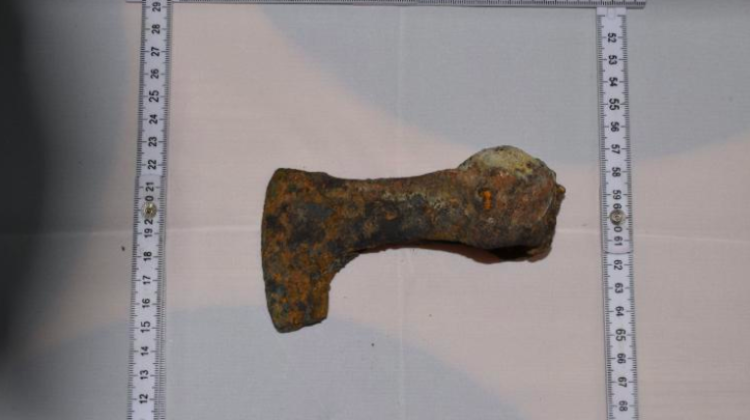 Nearly 2 thousand years ago, the Germanic peoples sunk weapons and valuable objects in the lake in Lubanowo, as did the Slavs in the Middle Ages. According to archaeologists, these were religious rituals. In 1945, weapons ended up at the bottom of the lake again - this time it was unexploded ordnance from the time of war.

Underwater archaeologists from the Institute of Archaeology of the University of Warsaw conduct research in the lake in Lubanowo since 2015. They were alerted about the nearly two thousand years old artefacts by military items hunters, who pulled items from World War II from the bottom of the lake - at the end of the military activity, unexploded ordnance was sunk in the lake. The reservoir was treated as a dump.

"So far, we have extracted about 200 artefacts from the lake, primarily valuable metal items, including bronze and brass ornaments made by the Germanic peoples in the first centuries of the era. A great surprise was this year`s find in the form of a dozen or items from the Middle Ages" - says the research project leader, Dr. Bartosz Kontny from the Institute of Archaeology of the University of Warsaw.

Until now, archaeologists believed that rituals in the form of sinking metal objects should be associated primarily with the Germanic peoples. Only a few years ago, such rituals were known mainly from the Scandinavian region.

"Meanwhile, offerings in the form of valuable metal objects and weapons were also thrown into the lake in today`s Lubanowo by the Slavs in the Middle Ages. This year we extracted axes, a padlock and a knocker. Based on the craft methods, we estimate that they were made between the 11th and 15th centuries" - says Dr. Kontny.

This is all the more surprising - according to the researcher - that sinking objects in lakes was a pagan ritual. It was believed that this practice was known mainly in northern Europe until the 5th century, and then, with the advent of Christianity, these practices were abandoned.

However, the method of sinking objects was clearly different. During the Germanic rituals, weapons were bent and destroyed, while the objects from the Middle Ages do not have traces of intentional damage.

Asked why the lake attracted people for thousands of years and witnessed unusual rituals, the archaeologist says: "It is distinguished by its depth. Today it is almost 20 m, and originally it could have been even 40 m. Perhaps the depths fascinated people. The locals still remember the legend of... brickworks sunk in the lake".

There are medieval forts around the lake, but the area is mostly unexplored by archaeologists and requires more extensive archaeological research. "Only this way will we find out who the people performing the rituals on the lake were" - says Dr. Kontny. The scientist believes that we should not expect too many settlements from Roman times, because the sacrum zone (which the lake was) was usually located far from the people`s homes.

During this year`s work in July archaeologists used underwater metal detectors. Researchers complain about deteriorating visibility underwater, which makes research difficult. Visibility now reaches up to 1.5 m, but it gets much lower at times. According to researchers, this is due to the increasing pollution of the lake.