Polish discovery helps in the fight against cancer 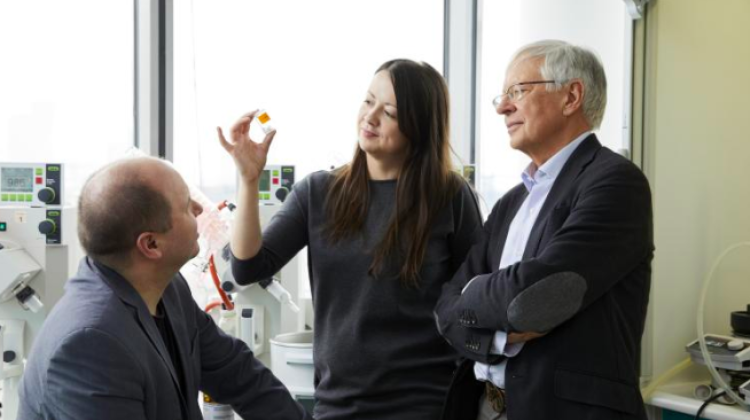 A personalized cancer vaccine that uses an invention of scientists from the University of Warsaw is currently at the stage of clinical trials. The Polish invention also gained recognition abroad - it was one of the nominees for the European Inventor Award 2018.

The 2018 edition of the European Inventor Award was held on 7 June 2018 in Paris. The goal of the event is to honour the authors of the best solutions that have significantly improved or may improve the quality of life. Among the nominees in the "Research" category were also Jacek Jemielity, Joanna Kowalska, Edward Darżynkiewicz and their research team from the University of Warsaw.

As the researchers explain in an interview with PAP, the invention nominated for the award granted by the European Patent Office is a technique based on a subtle modification of messenger RNA (mRNA). The solution is an alternative to introducing changes in DNA, which is an expensive, difficult and risky process. "You could say that mRNA is a +recipe+ for a protein: the gene in our cells is transcribed into messenger RNA" - explains Edward Darżynkiewicz. On the basis of information encoded in mRNA, specific proteins necessary for our body`s functioning are created.

Unfortunately, mRNA in its natural state is too unstable to be used in therapies. "Our invention consists in the fact that through a subtle chemical modification of a very small fragment we have increased the lifetime of mRNA by +breaking the teeth+ of enzymes responsible for its degradation" - says Darżynkiewicz.

He adds that the new technique is beginning to find specific applications - at the end of last year, clinical trials were initiated on a personalized cancer vaccine based on the discovery of Polish scientists. "This means that now clinical trials (of cancer drugs - ed. PAP) can be detached from a given type of cancer and it is possible to try to treat patients who suffer from different types of cancer in the same clinical trial" - emphasises Darżynkiewicz.

How does the technique discovered by Polish researchers work? "The truth is that we have not discovered a +cancer vaccine+, we have only found a way to stabilize mRNA" - emphasises Joanna Kowalska.

She explains that cancer vaccines are based on the use of dendritic cells. These cells are an important part of the immune system - they play a key role in stimulating lymphocytes, immune system cells.

"The therapy consists in delivering (modified) mRNA to the dendritic cells in the patient`s body" - says Kowalska. "Antigen proteins are synthesized based on a recipe included in the RNA. The purpose of these antigens is to activate our immune system to destroy those cells in our body that have this antigen".

"Before we synthesize such RNA, we must of course know which antigen is characteristic of the patient`s cancer" - notes the researcher. "After identifying the proteins that distinguish diseased cells from healthy ones, we can design an RNA molecule that will enable us to activate and train the immune system so that the patient`s body can find and destroy cancer cells" - she explains.

After the start of the European patent process in 2008, the team established cooperation with the company BioNTech from the University of Mainz (Germany). BioNTech specializes in gene therapies. Initial clinical trials using the discovery of Polish researchers began two years later. In the next step, BioNTech licensed the stable mRNA technology to the largest pharmaceutical companies, including the French Sanofi SA (in 2015) and Genentech Inc. (in 2016).

In July 2017, BioNTech published the results of the first human trials of a personalized, mRNA-based cancer vaccine using caps developed by Prof. Jemielity and his team. In 8 out of 13 study participants who had recurrent melanoma, no cancer cells were found during the 23 months of the study. Cancer decrease was observed in one of the other five people who developed new tumours.

According to the Polish researchers, the stage of clinical trials may take at least 2-3 years. "But remember that no RNA-based therapy has yet been approved - therefore, this time may be even longer" - adds Edward Darżynkiewicz.