Tornadoes have been recorded in Poland for 200 years 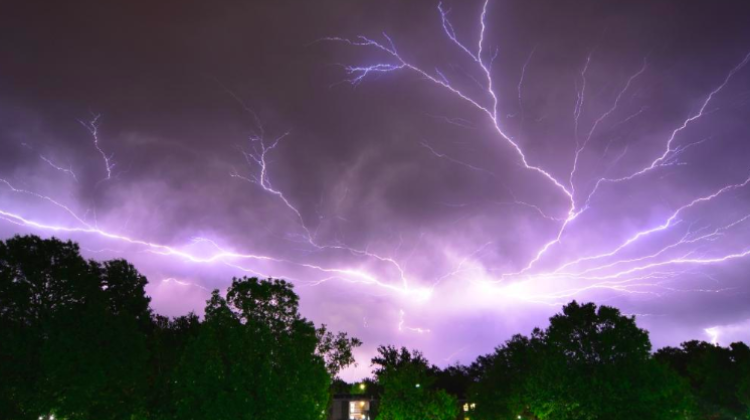 Tornadoes that carried people and animals into the air were recorded in Poland already in two previous centuries. Storms will become more frequent with the warming climate, but it is difficult to predict how their intensity will change - says Dr. Mateusz Taszarek, "storm hunter" and forecaster from Adam Mickiewicz University.

Extreme phenomena associated with convection, storms and tornadoes are the passion of Dr. Mateusz Taszarek from the University of Adam Mickiewicz. The scientist pursues it in theory - by conducting scientific research on the occurrence of extreme atmospheric phenomena - and in practice - as a "storm hunter" and forecaster.

Dr. Mateusz Taszarek is a laureate of the START programme of the Foundation for Polish Science. He investigates atmospheric conditions, in which storms form, and improves forecasting methods using numerical weather models. He is the author of the website www.enwo.pl, where forecasts of storm phenomena for the whole of Europe are prepared for a period of three days.

In the beginning, Dr. Taszarek investigated the occurrence of storms and tornadoes in Poland. During his doctoral studies, his research area covered the entire European continent. He analysed atmospheric discharges, strong gusts of wind, hail and waterspouts. He established cooperation with scientists from the United States. They had experience in studying these phenomena in the area of the so-called "Tornado Alley", where extreme storms and tornadoes occur most often in the world.

COWS, TREES AND CARS FLYING IN THE AIR

"A common view in Poland is that the tornadoes are a new phenomenon that started in the beginning of the 21st century. But the analysis of historical records reveals numerous reports of phenomena of this type that occurred over the last 200 years. In the nineteenth and twentieth centuries there were over a dozen strong tornadoes that caused heavy damage to the infrastructure, demolished buildings and caused numerous deaths. Other sources described a strong whirling movement and a well-developed funnel that carried people and animals into the air. Such phenomena occurred in Poland regularly - on average two or three times per decade. In the past, tornadoes caused more deaths. They are not so deadly now because buildings are stronger and the public is more aware of the threat" - says Dr. Taszarek.

In his opinion, storms will happen more often as a result of climate change. Thermal winter is getting shorter and thermal summer is getting longer. As the temperature rises, the rate of evaporation increases, so the moisture content is higher in the atmosphere. This means that conditions conducive to the formation of storms are more often met.

Jet stream, a strong air current at 6-10 km above seal level, is responsible for the intensity of storms, for example the occurrence of hail, strong wind or tornado. Studies have shown that with the warming of the climate, this current can shift towards higher latitudes. This may mean that in the next few decades storms will occur more often, but from the climatological point of view their intensity will not necessarily increase. Dr. Taszarek notes that these are only climate projections. Jet stream can meander strongly, and then dangerous windstorms and tornadoes can appear in Poland every often. The increase in the number of storms alone will also increase the frequency of situations leading to a potential threat.

Among the tornadoes that occur in our country there are also waterspouts. These are tornadoes that form over water reservoirs, for example over the Baltic Sea. They have a mild course, they usually form in the coastal zone and rarely move over the land. They reach speeds up to about 150-200 km per hour in the middle of the vortex. In Poland, several such phenomena are reported each year.

ROAR, FLASH AND LIGHTNING OR ... BORING STATISTICS AT THE DESK?

Dr. Taszarek belongs to the association Skywarn Polska - Polscy Łowcy Burz (Polish Storm Hunters). On a daily basis, the "storm hunter" conducts tedious, although to him fascinating, analyses of huge meteorological databases. He studies the conditions, in which extreme phenomena arise, and forecasts them. But when a model shows the day and time when strong storms are possible, the researcher gets in a car and drives straight into the whirl of events.

"After we develop forecasts, we check what is actually happening in the atmosphere. We monitor huge storm clouds, determine the wind speed, air humidity - the scientist says. - During my stay in the United States, I often went into the field with scientists from Oklahoma. We watched how tornados formed and strong storms evolved over time. A person who gains such experience becomes better at forecasting and studying these phenomena. The other side of the coin is that it becomes a passion. It`s an amazing adrenaline rush to get close to a big tornado" - admits Dr. Taszarek.

Spectacular photos of clouds and atmospheric discharges as well as a sense of fulfilment remain after such trips. However, above all, scientific passion finds application in practice, because it allows to improve methods of warning the public.

Dr Taszarek makes efforts to introduce an effective tornado and strong storm warning system. He says that the United States has such a system. Experts who have access to meteorological radars know exactly what is happening in the clouds and when phenomena leading to violent storms and tornadoes intensify. If they think that the approaching storm will be very dangerous, then they mark the area on the map where the cloud can move within the next hour. All people in this area receive a message on their mobile phones - regardless of whether they have a weather app installed or not. Suddenly, their phones start to vibrate and the message appears: "There is a tornado in your region, find shelter immediately".

"Poland has a good radar system that allows forecasters to estimate the intensity of storm phenomena. If we also had a direct warning system for people in the danger zone, many tragedies could be avoided. An example could be the strong wind storm of August 11, 2017. It was a classic squall. Unfortunately, the forecasters did not have a system to warn people in the immediate danger zone. After all, an average person in the forest has no obligation to check meteorological warnings on websites. The point is that the warning should find people, and the simplest way is using geolocation and sending a message to mobile phones" - explains Dr. Taszarek.

Skywarn Polska, an association of meteorology enthusiasts, is also trying to introduce a system of this type. For 10 years, the association has been warning about violent storms via its website and Facebook page. It prepares forecasts of the strength and activity of possible storms and determines which part of the country is threatened and to what extent. The warnings do not refer to the administrative division, they are issued based on current data from the radar network, field observations and satellite images.

Weather forecaster should know the location of people who are in the affected area. This allows to provide them with information that, for example, a tornado that can cause huge damage in a small area is forming. Therefore, it is necessary to introduce provisions that will enable geolocation of mobile phones and sending warnings to people in the immediate danger zone. An integrated warning system could minimize the risk for people staying in the area affected by extreme weather events.