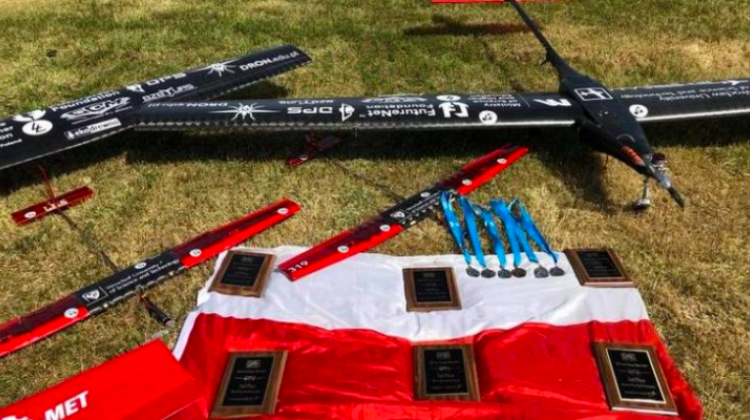 SAE Aero Design is a series of international academic competitions organized for 30 years by the American Association of Transportation Engineers (SAE) and Lockheed Martin. The task of the participants - student teams from around the world - is to design and build aircraft models, in accordance with the restrictions and requirements of the regulations imposed by the competition organizers.

The team from Poznan University of Technology triumphed in the prestigious Regular class, winning three gold medals: for technical presentation, flight and overall result. 37 teams from around the world competed in the Regular class.

"This year, the students` task was to design and build an aircraft that, at the lowest own mass, would lift the maximum number of tennis ball and metal bar sets weighing 230 g. Tennis balls symbolize passengers and bars - their luggage. The competition regulations define the material from which the plane should be built, as well as the type and power of the propulsion system" - says Radosław Górzeński from Poznan University of Technology.

He explains that the competition teaches independent solving of technical, organizational and logistical problems, team work, the art of presenting and documenting achievements.

They competed with the model called "Dragonfly". The task of the machine was to lift a 15 kg payload and drop it onto the designated target. According to the university`s press release, it is the largest model of this type built by the team from Wrocław University of Science and Technology in the entire history of their starts in the competition. Students used laser cutting and 3D printing.

Poznan University of Technology students compete in SAE Aero Design since 2008. They stood on the podium 15 times. The JetStream team from the Wrocław University of Science and Technology has been participating in this competition for ten years and won 20 medals.

The team from Warsaw University of Technology took the third place overall in the Advanced class, 1st place for the technical presentation in this class, and third place for payload drop accuracy. The Warsaw university was represented by a team of 12 people from the Interfaculty Students Research Group SAE AeroDesign Warsaw operating at the Faculty of Power and Aeronautical Engineering. According to information on the Warsaw University of Technology website, Warsaw students competed in all three competition classes: Micro, Regular and Advanced, they went to California with three airplanes. (PAP)