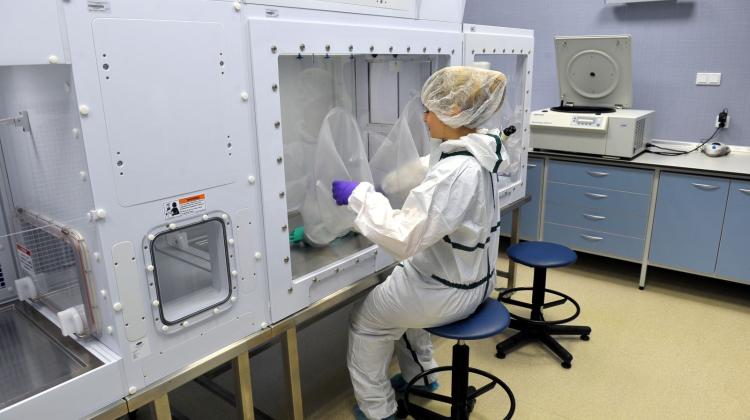 At the Pomeranian Medical University in Szczecin, research begins with the use of cell therapy to support patients in the treatment of degenerative diseases of the central nervous system, including amyotrophic lateral sclerosis, Alzheimer's and Parkinson's disease. Photo: PAP/ Marcin Bielecki 19.12.2017

Researchers from the Pomeranian Medical University in Szczecin are beginning research on the use of cell therapy, which can help patients with degenerative diseases of the central nervous system. The facility is looking for patients to participate in this study.

"Cell therapy is used successfully today in four areas: haematology, orthopaedics, dermatology and ophthalmology. The biggest challenge for us is to use it in neurodegenerative diseases: amyotrophic lateral sclerosis (ALS) and retinis pigmentosa" - told PAP head of the Department of Physiology and Department of General Pathology, PUM in Szczecin, Prof. Bogusław Machaliński.

The first studies on the use of cell therapy in degenerative diseases of the central nervous system were conducted at the Szczecin university in 2010. "We were among the first in the world to conduct a medical experiment using haematopoietic cells, and not other types of stem cells, as scientists from other centres do in amyotrophic lateral sclerosis" - reminded Prof. Machaliński.

"We take about 30 ml of the full marrow from the patient. On the same day, in the laboratory, we isolate cells that produce a lot of neuroprotective factors, i.e. protect the neural tissue. Neuroprotective factors, so-called neurotrophins are protein factors produced mainly by the brain, but, as we have shown, also by haematopoietic cells. Then 2 ml of suspension with our cells is administered to the nerve root canal at the PUM Neurology Clinic headed by Prof. Przemysław Nowacki" - he explained.

The professor emphasized that thanks to this therapy it is possible to "create a microenvironment in which the nervous tissue will have good conditions for existence and will not be exposed to factors that destroy it". "Our hope and strategic goal is to extend the comfort of life for patients" - the project leader pointed out.

He added that during the first tests 14 years ago, patients who were at various stages of the disease were given their own myeloid cells a single time. "In those who were in the initial stage of the disease we noticed a temporary slowing of the progression of the disease, and in 3 patients it even lasted for 12 months" - said Prof. Machaliński.

The Pomeranian Medical University is now looking for 45 patients who would participate in further research on cell therapy. "We are looking for people with a diagnosis, but in the initial phase of the disease, those who move on their own and have the ability to swallow. After initial tests they will be invited to take part in our therapy. We have the resources to administer cells to them three times, at 6-week intervals" - the professor added.

The research project is carried out under the National Centre for Research and Development grant. The leader of the project with estimated value of PLN 20 million is PUM. (PAP)